Inside the gummi bear Chandelier Jr.

One of the exhibitions features international artists like me whose contemporary work incorporates calligraphy. For several years, I have saved boxes of my mother’s calligraphy studies from the landfills and created large sculptural installations with them. Since I am interested in expanding the sensory components in my installation by working with choreographers or musicians, I invited my composer friend Jie Ma to lend a piece this time.

The production itself took several months with the assistance of two friends. Together, we made 5,667 paper bricks including approximate 1,600 blank ones and 5,000 with calligraphy studies. Each brick was folded from one or two sheets of Chinese calligraphy paper (double xuan paper) or tracing paper to increase the strength but still maintaining the translucency.

Considering the light weight of the paper bricks, experiments and engineering had to be carried out. Ryan from M.A.S. Plastics in Van Nuys mapped out the diagram according to my design and cut strips of thin acrylic to form the two “shelves” where paper bricks will sit on. Each shelf holds paper bricks of 14-stack high which is the highest without compromising the integrity of ones in the bottom.

The professional staff at SharjahArt Museum and Sharjah Art Foundation worked tirelessly before and after the artists arrived in Sharjah. It is especially heartwarming to me because I have worked with the same team when I installed another show here in 2014, another unconventional and labor-intensive process. It is delightful to see old friends on the other side of the world again. The technicians and museum staff, some with more than two decades of experience, are exhibition experts and my “Santa Clauses” who make wishes come true! “Haven” is a challenging project to be installed for the first time. I didn’t know what to expect but I knew I was in good hands.

Shah Jahan is the lighting guru I had to communicate with first. Once I secured his assistance, the most important task is accomplished. The thing I admire the most about these technicians are their dedication and willingness to go the extra mile in order to materialize an artist’s vision. No hesitation, no compromise. As soon as I relayed my desire to light nothing but the bricks and we experimented with a few paper bricks to determine the lighting needed to achieve the translucency, Shah Jahan’s decision was quick: all the lights and tracks are to be removed from the ceiling and reinstalled on the walls.

Next, Abdul Rahman, who only put up with my ever-changing mind for the tenth time, stood on the scaffolding drilling 100 holes on the concrete ceiling and patching. After the painters touched up the ceiling for the third time, David, who specializes in exhibition flooring, installed the exhibition carpet. It is a felt-like material with adhesive backing, a wonderful solution to a painted floor, and minimizes the shoe prints on a dark floor. Then, a tough phase followed, the acrylic strips took us another 3 full days to get them up and leveled due to some engineering problems.

At last, the fun started: unpacking 61 boxes, picking and choosing the right paper bricks for each level while creating a visual balance between the blank and the written ones. I am the only one who can decide where which one goes and, steadily, on the swinging acrylic strips, I laid the bricks of my mother’s and my labor for another 36 hours. 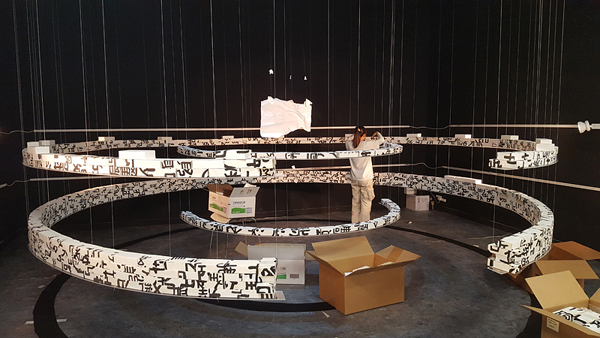 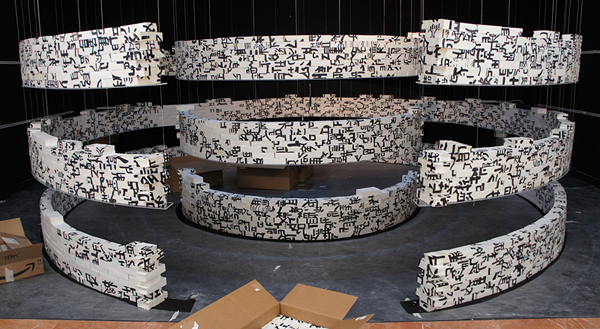 The acrylic strips and the paper brick walls were swaying due to the strong air flow by the air conditioning. Museum AC team was called to redirect the vent. The lighting technician came back to install the flood lights on the walls. 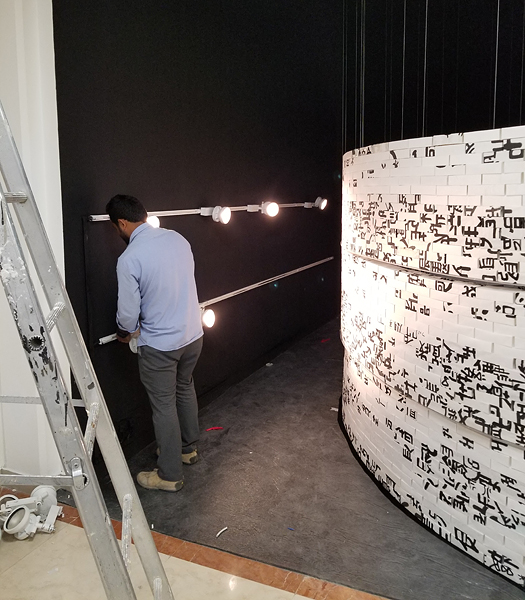 The maquette in my studio few months ago is now realized in full scale in Sharjah Art Museum, exactly the way I envisioned it. 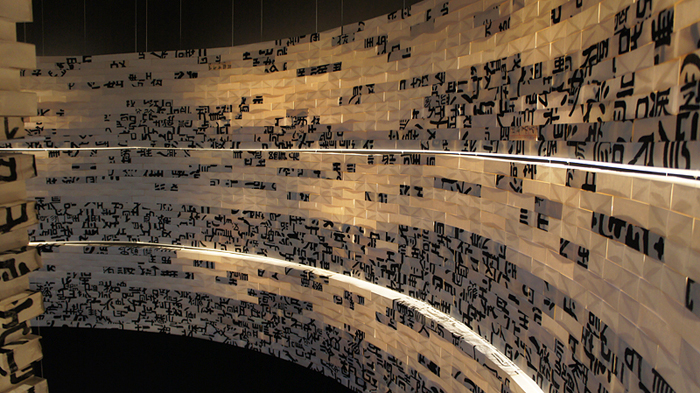 In the final stretch, cut-out words were suspended in the center of the labyrinth and the pool of ink was set up. 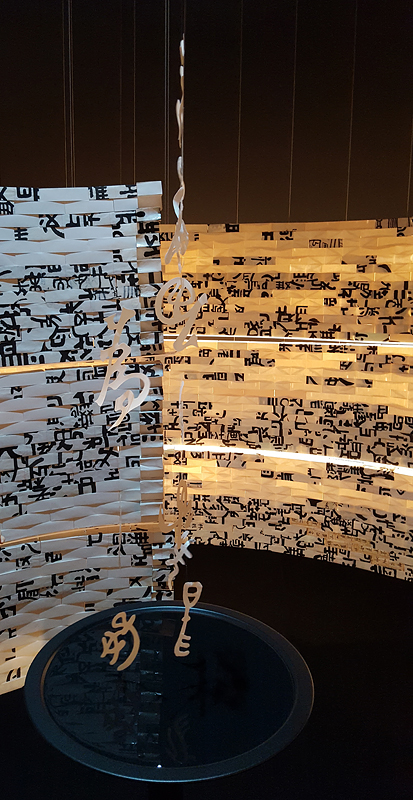 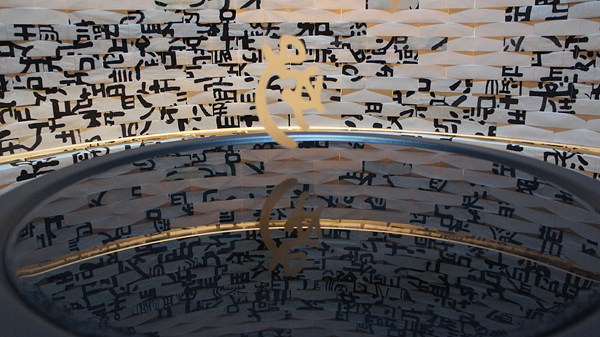 Shah Jahan came to set up the barn doors to fine tune the lighting on the center wall. A few days before the opening, the protective film was peeled off from the exhibition carpet and the final clean-up was conducted.
This photo is not for publicity but is my favorite, showing the installation next to the Islamic patterned window casting a beautiful reflection on the marble floor. 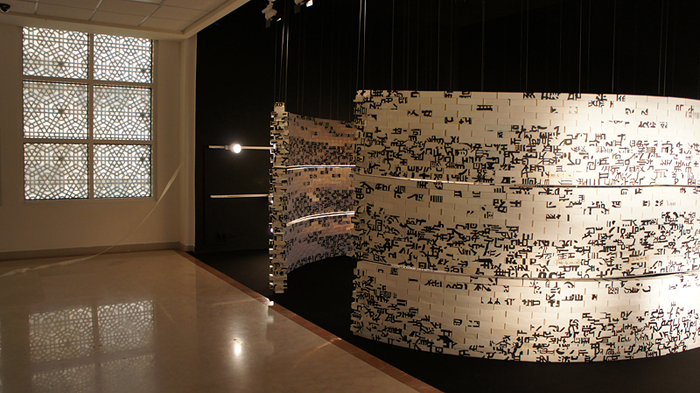